Boys with toy guns, action figures positioned on shag rugs and an American flag smeared with thick black petrol extract. “God is American,” an exhibition of Zak Kaghado of Brainstorm Management’s snap shop images and installations, is opening on April 22 in the new Gallery Korpus 3 on Stoleshnikov Per.

The venue seems well chosen, as the cynicism in the project is reminiscent of the tongue-in-cheek antics of another establishment on the same block — Denis Simachyov Bar and Shop. But there is a difference here, and not only in subject. Where Mr. Simachyov seems to gently mock his Russia, in some of his pieces Kaghado takes a more serious and critical look at his native America. Could either have done the spot-lit plastic transformers? Yes. The remnants of a burned American flag? Not as much.

Through the latter, an installation titled “war is bad,” and the other works where the image of the flag or the flag itself is involved the meaning of the show’s title becomes most clear. Kaghado could easily have reordered the words in the title to achieve the sentiment expressed in his exhibition: America is God. At least for the time being it certainly considers itself to be. In a piece titled “your inner voice” an American Apparel t-shirt is designed with the following words: “Politics is the new art;” “Massive profits in the name of God;” “Empire of shit” and “Liberty Freedom Death.”

“God is American” will run at Gallery Korpus 3 from April 22 to June 5. Entrance to the exhibit is free . 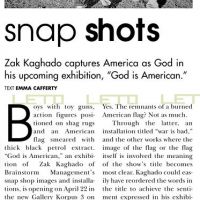